12 Monkeys is one of my favorite movies- I’ve watched it at least 7 or 8 times!

This movie is a masterpiece by director Terry Gilliam and it is an example of a filmmaker using a movie to deliver their personal message to the audience. I read that Gilliam made a more commercial film, Time Bandits (also a great movie) to raise money to make the movie he really wanted to make: 12 Monkeys. 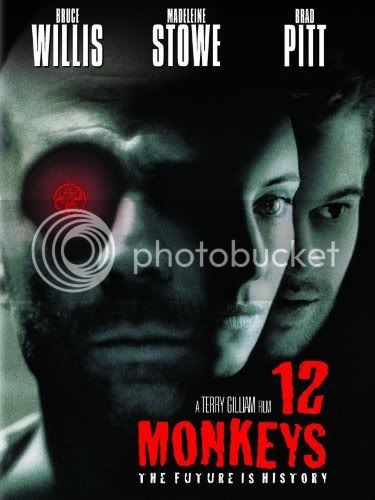 This movie has great performances by Brad Pitt and Bruce Willis. I once saw an interview with Bruce Willis where he said that he was scared to do the film with Terry Gilliam, because he knew that he would have to be a real actor and he couldn’t just be a macho action-film guy. He had heard that Gilliam didn’t actually want him in the movie at first, but other people persuaded him to give the part to Willis. Bruce Willis said that Terry Gilliam told him: “When you act, you always do this thing with your mouth. You can’t do that in my movie.”

You can read the whole script of 12 Monkeys here: dailyscript.com/scripts/twelve_monkeys but it’s a script, not a transcript. A script is the movie or play as it is written by the author. A transcript is what they actually say in the movie, so it might be a little different. It’s kind of interesting to see the small changes that happen in the process between writing the original script and what the actors actually say.

The words here are a transcript of this scene in 12 Monkeys- I corrected the script so it’s closer to exactly what the actors say in the movie clip.

If you have any questions about vocabulary or anything, please ask in the comments!

JEFFREY
There’s the television. It’s all right there. All right there. Look, listen, kneel, pray. Commercials. We are not productive anymore, they don’t need us to make things anymore, it’s all automated. What are we for then? We’re consumers. Okay, buy a lot of stuff, you’re a good citizen. But if you don’t buy a lot of stuff, if you don’t? What are you then, I ask you- what? Mentally ill! Fact, Jim- fact!

So if you want to watch a particular television program, say “All My Children” or something, you go to the Charge Nurse and tell her what day and time the show you want to see is on. But you have to tell her before the show is scheduled to be on.

There was this one guy who was always requesting shows that had already played. Yes! No! You have to tell her before! He couldn’t quite grasp the idea that the Charge Nurse couldn’t just make it be yesterday. She couldn’t turn back time, thank you Einstein! Now he- he was nuts! He was a fruitcake, Jim!

TERRY
Okay, that’s it, Jeffrey, you’re gonna get a shot. I warned you…

JEFFREY
Right! Right! I got a little carried away, explaining the inner workings of the institution to Jim.

JEFFREY
This is LJ Washington, Jim — he doesn’t really come from outer space.

JEFFREY
Get out of my chair!

LJ WASHINGTON
It’s a condition of “mental divergence”. I find myself on the planet Ogo, part of an intellectual elite, preparing to subjugate the barbarian hordes on Pluto.

But even though it’s a totally convincing reality in every way, nevertheless, Ogo is actually a construct of my psyche. I am mentally divergent in that I am escaping certain unnamed realities that plague my life here. When I stop going there, I will be well. Are you also divergent, friend?

This site uses Akismet to reduce spam. Learn how your comment data is processed.

English Teacher Fred has been teaching English as a Second Language (ESL) in classrooms in Vietnam since 2001 and online since 2007.
© 2009-2018 English Teacher Fred · Privacy · Contact · About · Google+
We use cookies to ensure that we give you the best experience on our website. If you continue to use this site we will assume that you are happy with it.Ok